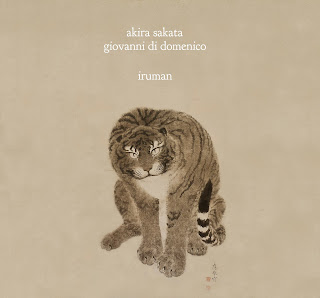 we're having problems with our website: if you want to order this CD, send us an email to: mbarimusica(at)mbarimusica(dot)com

Seijaku No Ichimai - A Piece of Silence 1:40
Kousa No Odori - Yellow Sand Blowing from China 3:48
Suiren No Saku Huruike – Lotus Blossom in an Old Pond 5:01
Yamadera Ni Kikoyuru Koe – Voice from a Temple in the Deep Mountain 6:00
Moe I – Bud I 3:46
Tanbo Ni Mizu Ga Hairu – Water Coming Into Rice Field in the Spring 2:55
Sukiyazukuri No Tatazumai – The Peaceful Atmosphere of a Wood Sukiya-style Temple 5:03
Hachi To Ohisama – The Bee and the Sunshine 1:39
Papiruma 3:23
Moe II – Bud II 15:23

Commissioned by Portuguese label Mbari, “Iruman” – which, in a career spanning 40 years, is Sakata’s first duo recording with a pianist – is built upon paradoxes. Its title, for example, notwithstanding the deconstructionist urge one senses throughout the CD, suggests brotherhood or even redemption. After all, iruman is a Japanese word of Portuguese origin, derived from the etymon “irmão” (“brother”), used by Jesuits who reached Japan in the XVI century. But, in the present context, the meaning of the word is only fully captured if we ignore its implicit missionary zeal. In fact, one could argue that what this music evokes does not stem from that ancient geographic and cultural collision but, rather, precedes it.

Sakata has always questioned stereotypes. His performance takes on a ritualism that is at times sardonic, others tender, taking communion from a truth that is unreachable and yet perfectly relatable. Perhaps because of this, even while fully integrated in a scene where most have a perfect notion of how free improvisation should sound like, he has remained immune to sectarianism. In “Iruman” the main drive behind the action was the premonitory nature stirred by an encounter with Giovanni Di Domenico, another iconoclastic juggler. Recorded on November 5, 2012, at the GOK Sound studio in Tokyo, the present material suffered no other predetermination.

Steeped in mysticism – one could well describe as anachronistic, if that concept wasn’t more of a feature in each listener’s own mind – these themes flow naturally with a dynamic that has something in common with that of chamber music though it emphasizes aspects usually neglected in the latter. There are provoking asymmetries, elliptic piano chords and cathartic oratories, niceties on the clarinet and astringent exhalations on the alto sax. An ambiance that could have been construed by a scenographer transports the duo to a remote village, devoted to enigmatic and ancient cults. This is not music of derision, destined to puncture conventions, even though Sakata and Di Domenico practice it splendidly. It isn’t specifically servile either.

Given over to so many nuances, in these spontaneously generated structures, perhaps its most surprising characteristic is its cohesion. Whirlwind declamations and primeval litanies serve a gregarious logic, in which the well-honed instincts of the improvisers methodically balance out individual utopia and collective drama. A certain phrasing from Di Domenico appears to gather countless phases of jazz piano, while other choices could effortlessly feature on a post-serialist piece. Sakata likewise sails towards a point of synthesis one would argue is inhabited by many other voices apart from his own – a tactic that is both tempted by transcendence as well as marked by minutiae, typical of one who investigates microscopic systems, i.e. those invisible to the naked eye.

In that regard, “Iruman” summons onto itself a perplexity generally absent from, not to mention almost contrary to, improvised music: that which presumes no man is the absolute lord of all he does and even less of his historical time. Sakata and Di Domenico are separated by nearly thirty years and originate from very distinct cultural universes, yet in translating all that is sacred and profane in creation, they are indeed like brothers.

Akira Sakata
Akira Sakata, sax player, was born in Kure on February 21, 1945, a few months before aerial raids destroyed the Japanese naval arsenal stationed in the city’s port and just in time to sense the shadow of the American bomber Enola Gay, on its way to Hiroshima. This is a region steeped in perpetual grief, whose pain has been forever pressed up against the reconstruction effort, causing surprise, delusion and alienation in a generation that grew up despising nationalistic cults. Many felt that opposing cultural conformism was the only way to bring together all that is strange, beautiful, grotesque and mysterious in life – an attempt to give some shred of meaning to the irrationality epitomised by the atom bomb.

Jazz, popular in Japan since the 1920s, and further validated by the American occupation, came about as an essential tool in the development of a critical spirit, legitimizing deviant behaviour, but also bringing visibility to the pain and suffering, offering a chance to dialogue with chaos, a way back to the world. The trio made up by Yosuke Yamashita, Akira Sakata and Tateo Moriyama symbolized this impulse, presenting to the West – in festivals such as Moers, Berlin, Montreux or Newport and in LPs such as “Clay” or “Chiasma”, edited by ENJA and MPS in the mid-1970s – a free jazz looked upon as the result of a separate evolutionary strain. Other LPs from the period – such as “Distant Thunder”, recorded live by the trio with Manfred Schoof – further emphasize a speech that was taken up with a need to escape any form of coercion.

Back in Japan, Sakata took this libertarian paradigm into other areas. His recordings dating from the first years of the 1980s, from the theatrical “20 Personalities” to the idiomatic essays with the group Wha-Ha-Ha (not coincidentally released by the Better Days label, the anchor catalogue for the most singular and futuristic synth-pop, and in Europe, partly licensed to Chris Cutler’s Recommended) ran a parallel track with an international career progressively linked with the most uncompromising and globalized jazz fusion. In 1981, he performs in Berlin alongside The Lounge Lizards, James Blood Ulmer, Defunkt and Bill Laswell’s Material. The American bassist would later on invite Sakata to take part in the “The Noise of Trouble” session with Herbie Hancock, Sonny Sharrock, Peter Brötzmann and Ronald Shannon Jackson. Laswell would be a constant presence in other key moments of Sakata’s discography: the producer in 1991 of “Silent Plankton” and “Autonomous Zone” (with Ginger Baker, Foday Musa Suso, Anton Fier and Brötzmann) and later, in 1996, of the pan-Asiatic project Flying Mijinko Band (Fier, Suso, Nicky Skopelitis, etc), whose Japan Foundation sponsorship took to Uzbekistan, Mongolia and China.

Since 2005, through countless collaborations with Jim O’Rourke, Chris Corsano e Darin Gray, Sakata’s path has gained a renewed visibility outside his native Japan. Recordings such as “Hagyou” (with Boredom’s Yoshimi), “Friendly Pants”, “And That’s the Story of Jazz” and “Sora Wo Tobu!” (also listing Yosuke Yamashita) as well as tours in Europe and North America have made his name familiar to a new generation. In the past couple of years the ties between his artistic activity and his career as a marine biologist and guest lecturer at Tokyo University have also grown closer as demonstrated in the DVD “Mijinko – A Silent Microcosm” dedicated to the water flea.

Giovanni Di Domenico
Giovanni Di Domenico, pianist, was born in Rome on July 20, 1977, a significantly tempestuous period in socio-political terms, featuring hostile polarizations and an ostensive paramilitarism, mutinous ideological confrontations and bloody terrorist attacks, rendered infamous in the description ‘Years of Lead’. In that particularly caustic summer, the so-called ‘Movement of 1977’, non-aligned, without any ties to the Parliament and non-violent, broke into the scene of prevalent conspiracy-steeped paranoia condemning the repressive, discriminatory and authoritarian tendencies of the Italian State and demanding equality for minorities and further civil rights. The coinciding liberalization of the media market, putting an end to RAI’s monopoly, further defined this period as the prime moment for pirate radio, with the consequence of a libertarian fragmentation of youth culture, epitomised by punk.

One could argue that Giovanni, self-taught until the age of 24, inherited – in philosophy, politics and artistically – the most benign and affirmative traits of that period, diversifying his action in the context of a recently unified Europe, promoting improbable connections, exploring varied geographies, comfortably manoeuvring aesthetical fringes and making a commitment to live performance at its most liberating and engaging. Surprisingly, the path that lead him to that point had an unexpected detour: following his father’s consecutive assignments as a civil engineer he actually lived out his first decade in Africa – until he was five in Libya, from then until his eight anniversary in the Cameroons and until ten in Algeria. His far off native country was not synonymous with civil unrest as much as with opera, whose arias he would memorize with his siblings in order to practice the language and provide some family entertainment. The condition of expatriate had a strong influence in his education – he clearly remembers the calls of the muezzin, the sound of exotic musical instruments in local markets, the ritualistic expression music took in the streets of Yaoundé, or the songs he heard from his nanny in the Cameroons. Perhaps because of this he currently blends in so effortlessly in the Trance Mission collective of Moroccan Hassan El Gadiri.

When he finally enrolled in music school – majoring in ‘jazz piano’- he further built on an encyclopaedic technique; rhythm, harmony and tone are informed by non-western traditions yet equally sensitive to Debussy’s “Préludes”, Luciano Berio’s “Sequenzas”, to the ‘ambi-ideation’ heard in Borah Bergman’s Soul Note recordings, Cecil Taylor’s polissemic density, Paul Bley’s bruised transparency and of course, the most radical manifestations stemming from the underworld of pop music, invariably tied together by his own original praxis. A distinction – one would call it generational – he shares with many of the musicians he has crossed paths with recently, of which we could enumerate Nate Wooley, Chris Corsano, Arve Henriksen, Jim O’Rourke, Alexandra Grimal, Tetuzi Akiyama, João Lobo or Toshimaru Nakamura. Di Domenico has founded his own label, Silent Water, home of an eclectic and occasionally unclassifiable production. He lives in Brussels. 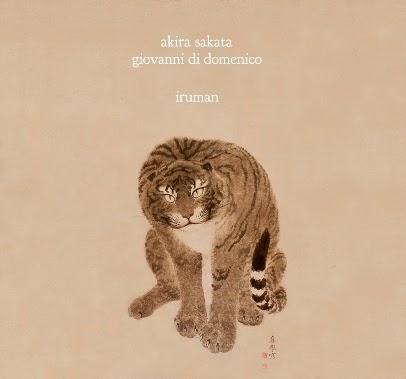